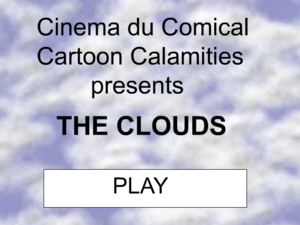 The Clouds is a Flash animation made in 2004 by MJBDiver.

It first shows a sky filled with clouds with some text saying "Cinema du Comical Cartoon Calamities presents: The Clouds", and a Play button at the bottom. When clicked, the button leads to a scene with an animated cloud background along with piano music. Then, some text appears asking "Do you remember watching the clouds?" followed by "Do you remember lying there on top of the grassy hill and staring at the open sky?" "What could you see in those clouds? A duck? A boat? Or maybe a giant cat?" "Watching the clouds was sure fun, wasn't it?" "You can still enjoy the clouds today" "Just drop everything you're doing, go to your back yard, lie down, and enjoy the clouds." Then, the phrase "They're still up there," shows shortly, before being cut by a picture of a woman with large black eyes, a missing tooth and a beard, along with a loud belching sound. Then, the word "FIN" is shown with a Replay button.

File:TheClouds Showcase.mp4 Black image is used in place of screamer.