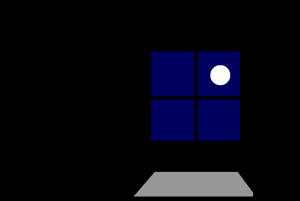 The room containing the darkness.

Fatal Darkness is a Flash screamer made by MJBDiver in 2004.

The Flash first displays a Microsoft Paint window in a dark room, with the window visible due to the moonlight outside; sounds of crickets, a clock tick, and footsteps play. After 32 seconds, the screen turns black in its entirety, and stays building suspense for some more seconds. The credits then start to roll - but the player is not yet safe from a jumpscare: a ghostly face appears with a scream before the replay button shows.