MJBDiver (Michael J. Brazinkas) is a 3D animator, Blogger who was born in July 24th, 1969, he currently lives in West Palm Beach, Florida. with his sister: Renee K. Hoffman (alias: Renne K. Brazinskas), who was born 21 days before Michael, he also created a tons of screamers on his site.

MJBDiver is an abbreviation to his real name (Michael J. Brazinkas) and the word: Diver, by definition, it refers to be his former habit in 2001.

He has a habit of diving (hence the username), he takes a photograph in underwater and taking a little bit of context into it, those photographs were posted on his site called: "Divers World" (diversworld.com).[1]

Michael launched the website titled: "MJBDiver Productions", Firstly, the site's content is blank but a 3D-style logo and a view count, Michael redesigned the site, and now contained animations created with Adobe Flash, Photographs, and links to his other websites along with his LiveJournal page.[2]

In 2002, he discontinued because he was tired of hosting, one later brought the domain and changed into a major portal site, another managed to acquired and turn it into a site regarding selling jewelries, the website changed owners numerous times until 2013, Michael wanted to get his domain "but could not afford the $1,200 price tag it had at one time." As the site finally shuts down, he purchased the domain and turn it into a blogging site created with WordPress.[3] 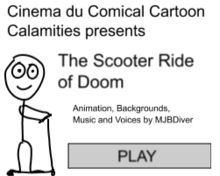 One of early flash ever created, titled: Scooter Ride of Doom.

He is widely known for his iconic stickfight animations and screamers, those were uploaded from his old, abondoned site called: Cinema Du Comical Cartoon Calamities, it was also uploaded to Newgrounds in 2001 as a way to promote his old site, but unfortunately resulted in lower scores, leading him to shut down along with the CDCCC, he left his final message before being deleted.[4] and a note about the discontinuation of CDCCC from his main website, it also includes the origin of it. (see below)

Michael stated that it was an old site as already mentioned, where he posted his animations created with Adobe Flash, As a result it received so much traffic until he discontinued the site along with the official MJBDiver site, then he re-registered the MJBDiver.com and turn it into his blogging site, At the time when the site was founded, he was single and lonely at his apartment, he created the animation as the way to make friends online, but somehow the plan worked.

He hangs out with them in the discussion forums, sharing their animations and more, it was revealed that he's the oldest one since that most of his friends is in their early teens days and he was in 30s, he continued contacting in discussion forums as part of his entire social life, after a few years later, he has more real-life friends, leading him to not make animations as the way to make friends and discontinued the site, his interests have changed and now engaged with photography and writing fiction.[5]

Martyn Cruise also featured his screamers as part of his collection on the website called: Scaryswf.co.uk.