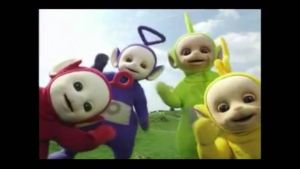 As if those bastards weren't scary enough...

TELETUBBIES SCREAMER is a screamer video uploaded to YouTube by the user Tradr on October 3rd, 2015.

It starts by playing a Spanish version of the Teletubbies intro theme and introducing all four of the Teletubbies (Tinky Winky, Dipsy, Laa-Laa and Po). However, at 14 seconds mark, a picture of Amy Peterson from Fright Night pops up with a loud same scream which is the same scream used from Zoeken and Jessica Alba Naked.

There is a variation where the face is replaced with that of Regan MacNeil from The Exorcist along with her usual scream.