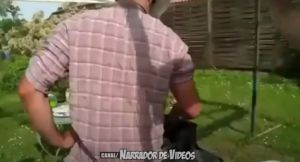 ACIDENTES ENGRAÇADOS 3 - NARRADO PELO GOOGLE TRADUTOR is the third episode of a Brazilian compilation of funny videos of people doing accidents (like pooping on the pool, or a pig falling from a truck) made in March 11, 2015. The voice of Felipe, which is a Brazilian Text-To-Speech voice, narrates the scenes every now and then. At the 3:03 mark, the narrator claims that something from the video called its attention. In the video, a man in a parking lot is shown grabbing a trash bag, and he's ready to throw it in the trash truck. However, he fails, and the trash bag opens itself on the ground, leaving it all dirty.

Probably because of the quality of the footage, an illusion makes it look like an old lady suddenly popped in the bottom right corner of the screen. The narrator points that out, and decides to zoom in on her. When he does that, X-Files' theme song starts to play. At 3:31, a picture of Regan MacNeil from The Exorcist pops up with the same scream from The Maze, but played once.

After the screamer ends, the narrator says in Portuguese: "Kkkk, eu precisava fazer essa zueira. Aposto que pensou que nunca mais iria cair nessa pegadinha, né? Só que não, harara! Agora que estão recuperados do coração, vamos para o próximo vídeo", which means: "Hahaha, I needed to make that trolling. I bet you thought you would never fall for this ever again, right? You were wrong, harara! Now that you've took a breath, let's move on to the next video." After finishing that sentence, the rest of the video plays normally.

The name of this video never fails to get me. That all-caps Portuguese sounds funny as fuck.