In April 2005, a German beverage company named K-fee released nine 20-second-long television commercials as part of their Wide Awake campaign to advertise their coffee drink. These commercials have been heavily criticized for their content and many feel that the adverts are very uncommercial and upsetting, though their shocking visual is built to simulate the effect that the product has on the viewer.

The commercials consist of peaceful scenes, such as a car driving down a grassy hillside to soothing music. However, at some point in the ad, the scene gets briefly interrupted by either a zombie or a gargoyle screaming at the camera, followed by the company's slogan and the product, accompanied by the fast heartbeat.

K-fee received a lot of complaints from their viewers, and soon after that, the ads stopped being aired on television. Some people say that on some other occasions, a warning message was displayed before the advert played, informing any young children, easily scared individuals, and people with heart or certain health conditions to not view the footage. However, this is unproven.

An episode of The Tonight Show with Jay Leno, aired in April 2005, featured a segment where the audience and Jay reacted to K-fee's Car commercial. It was hosted on K-fee's official website back from 2004 to 2007 along with the other adverts. The K-fee Car commercial was also featured in 2005 on Tarrant on TV, a famous British show, as well as on America's Funniest Home Videos.

On January 29th, 2021, Rhys Lapsley (Wollstone Studios, Rhys Productions 11 on this wiki) uploaded a one-hour documentary video featuring the actors from the commercials as well as several others involved in their legacy of them.

Each commercial had both German and English versions, with the captions at the end in the respective language. There was also either a zombie or a gargoyle at the end of each advert. The zombie was played by American actor Brad Johnson, and the gargoyle was played by his brother, Adam Johnson. These ads were first aired on television on April 30th, 2005. 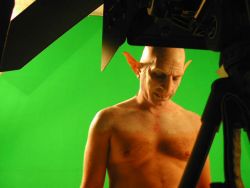 In December 2004, K-fee released four radio advertisements: Investment, Love, Relaxation and Christmas. The ads were available in English and German.

In December 2005, K-fee released new commercials for their line of Latte macchiato drinks that parodied their prank flash-style commercials. Using the footage from three of K-fee's most popular commercials (Auto, Beach, and Golf), the company replaced the zombie or gargoyle at the end of the ad with less-frightening characters, followed by the text "Jetzt auch mit weniger Koffein." (which translates as "Now also available with less caffeine") or in the English version, "Now, without so much caffeine." and a picture of a Latte Macchiato or Latte Macchiato Vanilla bottle. The Latte Macchiato commercials were made in English and German and used the same soundtracks from the originals with a higher pitch. These ads were first aired on television on December 27th, 2005.

Between December 2006 and February 2009, K-fee released multiple picture-based advertisements in magazines presumably in Germany. Not much is known about these advertisements, such as what magazines they appeared in.

K-fee has won two awards for its advertisements. 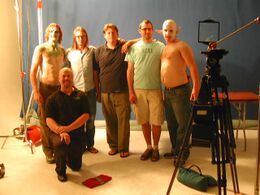 On the Internet, an alternate ending shows, instead of the product and the slogan, the text: "Now...Go Change Your Shorts And Get Back To Work!" in Arial Black instead of the normal ending; the video has gained over 12 million views as of 2018.[6] Other manifestations of this ad include being sent as part of a chain-mail which supposedly depicts a ghost appearing during the filming of a television ad (sometimes from Great Britain); the viewer is instructed to follow the car closely, as a "mist" is supposed to appear next to the car at some point. The "mist", of course, never does appear, and the commercial plays out as described above, much to the chagrin of the viewer.

In the Cartoon Network animated series The Amazing World of Gumball (season 2) episode named "The Internet", parodies the K-fee commercials. In one scene, Gumball and Darwin appear randomly browsing the web while watching videos. Among these videos, they come across what is implied to be the K-fee Car ad.[7]

Gumball watches the video on Elmore Stream-It, commenting on the white car driving through the hills and staring closely at the screen, when suddenly the loud scream is heard, causing him to have an intense reaction which gets recorded and posted to the web. The rest of the episode involves Gumball trying to get the video removed, which has given him unwanted fame.[8]

NOTE: The following videos do not contain screamers.

This article is available in other languages.