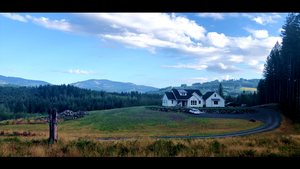 In the summer of 2019, an American YouTuber under the name Finder Lurker had created 21 videos of what "modernized" advertisements for the now-defunct K-fee coffee flavored energy drink would’ve looked like. These commercials are similar to the original advertisements the company had originally made.

Finder Lurker, claimed they were official but this was proven to be false when they showed a, "Making-Of" of all of the commercials. The person who created the, "modernized" advertisement's name is Devin Millar, and he had done the editing, filming, narration, and even is the monster. This user a musician, artist, animator, and YouTuber outside of the commercials under his real name, and also Friday Sister Peep.

There are English, German, Espresso, Radio, and even poster advertisements of the commercials all created by Finder Lurker, and they are all in similar formulas to the original advertisements. They all start out with a peaceful scene along with peaceful music before getting briefly interrupted by a monster at the end screaming, and possibly scaring the viewer. Except instead of Adam, or Brad Johnson, it is Devin Millar himself as a Demmonic Ghost-like creature with dark eyes and a long smile. (Similar to that of Jeff the Killer, or Momo.)

There was also, "Light" versions similar to the original ones for the original commercials made by the same company, but this time with Finder Lurker's versions. They even high-pitched the music as well, to match the original atmosphere of the original videos too in the same way.

Finder Lurker also had created, "Magazine" advertisements that had artwork of disturbing imagery of cartoon teenagers killing their parents, authority figures, and vice versa, and of very obscure art intended to wake up the viewers in the same way as the original magazine ads. Despite being called, "Magazine" ads, none of these actually appeared in any real life magazine issues.

Finder Lurker had also created, "Espresso" advertisements which are very short videos with scaled down screamers usually in the Instagram format, and specifically designed for such. They usually feature some kind of, "Challenge" or meme related thing for a couple seconds, or sometimes even minutes, depending on the theme, before the ghost-like creature jumps up or down from either side of the screen screaming for a short period before ducking and then showing the product information. In this case it's advertising their, "Espresso To-Go" drinks from the company's old, and one of their original websites from 2008 that they previously had really advertised, which can even be seen on the Wayback Machine revisions. There never used to be any advertisments for this and that is why Finder Lurker had particularly made it a thing.