The Creepypastas are user-generated paranormal stories that spread across the internet, mostly appearing on notable sites such as 4chan, with the intention of scaring the readers. These stories include suicide, murder, and other morbid things. Many of the first creepypastas were created on 4chan's /x/ board, which focused on the paranormal. Creepypastas can be listed here if they have or relate to screamers.

Sonic.exe is a story about a child named Tom, who had received a disk copy of Sonic the Hedgehog from his friend, which was for him to destroy it. In the game, a different title screen is shown, featuring an eyeless Sonic with glowing pupils and blood flowing out of his eyes, with the background turned into a dark, red version, while omnious music plays in the background. The title screen soon fades into black, where a select screen appears, with Tails being the only playable character in it. Tails would appear in the "Green Hill Zone" level with no actual gameplay. While the level is almost completely empty, continuing to walk forward for long enough would result in dead animals. If Tails makes it towards the end of the level, he will encounter Sonic with his eyes closed. At this point, a short cutscene plays, where Tails slowly walks into Sonic's shoulder. Once Tails touches him, Sonic will open his eyes before cutting into black, with text stating: "Hello. Do you want to play with me?" Tails was then brought to the next level, where the "game" was to run away from Sonic, but Tails was caught and killed thereafter. Despite Tails being the only playable character, he is followed by Knuckles and Robotnik. As Robotnik, the goal was to walk down stairs and run forward inside of a castle lined up with lights, where he would encounter Sonic.exe in front of him. From here, a hyper-realistic photo of Sonic.exe appears with the words "I AM GOD!" on the screen. After a while, Tom found a Sonic plush toy covered in blood behind him.

The story was written by JC-The-Hyena and submitted to Creepypasta Wiki, but it was removed due to it being poorly-written.[1][2] An indie game developer MY5TCrimson published a titular game based on the game-play the story explains, to Gamejolt in 2012.[1]

An image titled "Smile.jpg" was posted to the image-sharing website UseNet without a story. The image features a Siberian Husky with a human-like grin along with a red handprint next to it. As there is no story (or origin) for the image whatsoever,[3][4][5] creepypasta writers created stories to explain the image. The most well-known example is that of an amateur writer. The writer narrates in the story that he met an old woman named Mary E, who was one of the three hundred people who found the image when she saw it at the small Chicago-based Bulletin Board System (BBS) in 1992. Mary claimed that after the day she saw the image, she received a floppy disk with one file on it, but was refused to do so. Later on, Mary's husband informed the writer that Mary had committed suicide. The image was considered to have caused nightmares for viewers who viewed it, and had been described as "beckoning" by those who saw the original, and some claimed that the handprint on the image was the hand of the devil. The original image is unknown, but fake recreations of what many people described the original exist. Its first appearance was made on 4chan's /x/ imageboard in 2008.[3][4][5] 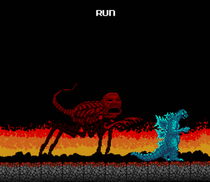 NES Godzilla Creepypasta is one of the famous creepypasta stories about video games.

NES Godzilla Creepypasta is the story of a video gamer named Zachary, who discovers several disturbing characters in Godzilla: Monster of Monsters game cartridge, one of his favorite childhood NES games. Shortly after defeating Gezora and Moguera, Zachary noticed something odd with the game, such as several disturbing characters and more, which Zachary will uncover. Originally posted to a website forum Bogleech,[6] a developer named Iuri Nery will also try to develop the game based on the story.[7]

Jeff The Killer is one of the classic stories in creepypastas. The story is about a 13-year-old child named "Jeffery Woods," who had recently moved into a new neighborhood with his brother Liu and his parents. On his first day of school, he was bullied by a group of three bullies and threatened with being killed with knives. He was then arrested after his brother Liu took the blame for it, resulting in him becoming very depressed and stressed. His parents forced him to go to the party, where he was attacked by the bullies again. Jeff killed one of them, but he was doused with alcohol and set on fire.[8] After taking off his bandages at the hospital, he found that his face had become disfigured and ghastly pale. After being told to go home, Jeff's mother found him carving his face into a smile, vowing to never exert energy to smile again and burning off his eyelids to see his face. At this point, he became insane and killed his family. He became a serial killer, sneaking into people's homes and telling them to "Go to sleep." before killing them.[8][9]

The character of Jeff was originally created by DeviantArt user Sesseur. Sesseur was not the author of the story above, but it was written by a fan of his earlier work. A heavily-photoshopped picture of Jeff The Killer was also known for being used in many screamers, such as Anne.jpg. The photoshop originally came from the /x/ imageboard on 4chan, but it became controversial after it was rumored to be an extensively-edited picture of a woman named "Katy Robinson", who had committed suicide[9][10] in 2008. However, 4chan's research shows that this unedited image originally came from a Japanese website, pya.cc.

BEN Drowned also known as Haunted Majora's Mask Cartridge, is a web series an alternate reality game created by Alexander D. Hall, better known as "Jadusable". The story of Ben Drowned talks about a graduate student named Jadusable who received a haunted cartridge of The Legend of Zelda: The Ocarina of Time from an old man at a garage sale. The cartridge contained a save file of the former owner BEN still on it, so he created his own save file for himself, named "Link". However, Jadusable had encountered a bug where NPCs would sometimes call him "BEN" rather than "Link" itself, which led Jadusable to take the blame for the save file of BEN. He then deleted the save file to fix the problem, and it worked. There was nothing odd happening when Jadusable tried modifying the game out of place, until after he tried the Clock Tower trick, he was brought into the middle of a Majora boss fight room, where Skull Kid stared at Jadusable for a few seconds. This prompted him to visit 4chan and discuss about this haunted game. The game had follow-up stories to continue.