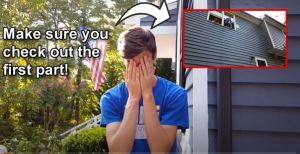 SMASHING AN iPHONE 7 EXTRAS!!! is a screamer video uploaded by a channel named Smash It on September 16, 2016.

The video is about a guy and his friends who decided to destroy an iPhone 7 extra for a video using a baseball bat, the video itself seems fine, until at 1:09, where it shows a girl pulling off the flowers, the audio is complete silence, so it's quite obvious that there was a screamer which tricks the viewer thinking the audio is a bit-broken, however, the video got interrupted by a picture of Regan MacNeil along with the same scream from The Maze, then subsequently continues the video, where it finally shows them destroying an iPhone.