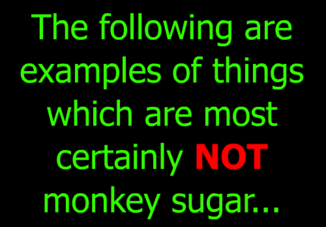 The text that appears before showing disgusting/gruesome images.

Monkey Sugar is a shock site based around a flash animation. Upon starting, it shows a black background along with some green text, and a robotic female voice (probably Microsoft Mary) explaining the meaning of the term Monkey sugar.

She starts saying that monkey sugar is "Anything that makes one physically satisfied. By extension, anything good or desirable."; once she finishes speaking this, the text changes to the next part, and she continues: "The following are examples of things which are most certainly NOT monkey sugar...". Approximately 4 seconds after this, a shocking image of a damaged head appears, followed by other disturbing images including:

It is not known exactly if this site aims to be a shock site as an animation, because it can even insinuate black comedy, considering the way the images are presented, and the music.