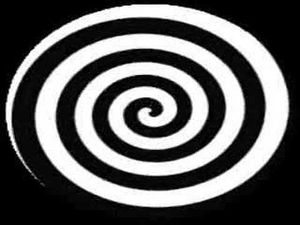 Look at this is a screamer video uploaded to YouTube made by santinothepoopoo on October 15, 2007.

The video itself it is pretty self-explanatory, then shows the circled spinning black and white spiral, however. after about 12 seconds, a well-known screamers, like: Jigsaw from the SAW Franchise, then a clip from the movie The Shining, Pennywise from IT and Samara Morgan from The Ring pops up in a fast slideshows accompinated with the loud screams.