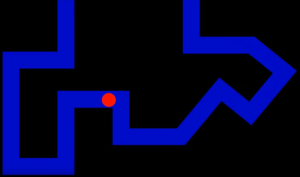 Follow The Red Dot 3 is a screamer video uploaded by Elijah Joel McDowell on December 18th, 2015.

The video is a prequel to the original dot maze as the title implies, but the difference is the maze in dark blue color, you can see a red dot navigating through the path, without touching or hitting any of them since its just an animation, each of them is individually getting narrower and diagonal, 2 and 3 levels are very similar to The Maze, as the title suggests again, the dot was meant to be focused on by the player, when the dot is nearly complete, a picture of Katie Embry appears along with a loud scream, in shaking animation, ending it with a text with Russian letters written, then eventually, shows the same screamer again.