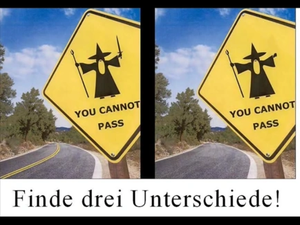 Find three differences! (German: Finde drei Unterschiede!) is a screamer video uploaded to YouTube by ErtErton on November 25, 2009. Clocking at 23 seconds in length, it's one of the many "find the differences" screamers made in the style of the original version of Zoeken with the particularity that this one has a Lord of the Rings theme.

The picture displayed is that of a road surrounded by trees and dirt, with a mountain slightly visible in the background, and a yellow road sign that's up-close to the camera, covering most of the right portion of the picture. This road sign contains a minimalist illustration of Gandalf along with a slightly modified version of his catchphrase: "YOU CANNOT PASS." The video is naturally a trick as there are only two differences that are obvious on purpose: Glamdring is gone from Gandalf's left hand, and the yellow median strips are missing from the road. The picture on the right has a blurrier look than the left, which may contribute to the feeling that a third difference exists. However, this is only noticeable when comparing the pictures side-by-side.

After 20 seconds of just the pictures and absolute silence, Gollum appears and repeats his name twice. The image is a screenshot from one of the movies and those familiar with his appearance might be unfazed by it, however, his voice is loud enough to qualify as startling.