Animaniacs intro with a surprise! 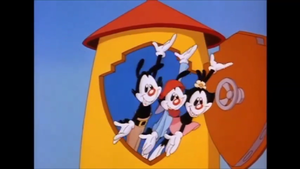 Animaniacs intro with a surprise! is a screamer video uploaded by Aldrine Joseph 25.

In the video, the opening sequence to the 1993-98 Animaniacs series plays normally, but at the part where the variable verse would appear, Regan MacNeil in her possessed form pops up with the same scream heard from The Maze. After that, we cut back to the ending part of the intro, where the Warners sing "Animaniacs! Those are the facts!".