Difference between revisions of "Ghost Caught on Tape" 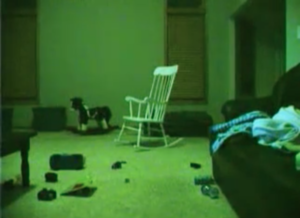 Ghost Caught on Tape, also known as Scary Rocking Chair or Ghost Chair (on winterrowd.com), is a 20-second screamer video uploaded by Steve Zuranski (YouTube user SZWORLD) on October 1, 2006. The video has gained over 76 million views as of May 2018.

The video starts in a dark room with a rocking chair in the middle. There is a Chevy commercial playing very quietly in the background. Nothing moves, until near the end, the rocking chair starts moving; right after, Regan MacNeil pops up in front of the rocking chair and runs up to the screen screaming. After around 5 seconds, the video changes to a white text reading "www.szworld.net." then the video ends.
An alternative version exists which replaces Regan's possessed face with a female with black eyes and mouth.