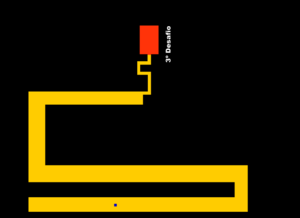 7 Level Scary Maze Game is a Flash game made by Luiz Helder as a homepage to The Maze, and it can be considered a spiritual sequel of sorts. It was originally hosted on his now defunct games and animations website, where it was simply known as "Labirinto" (Portuguese for: "Maze").

The first three levels are identical to Jeremy Winterrowd's Scary Maze game, including the screamer in Level 3, which is impossible to bypass by ordinary means. It is, however, possible to cheat by right-clicking and moving the cursor towards the end of the level while the flash menu popup is open (note that another common cheat of holding the mouse button down to pass through walls doesn't work, since clicking results in a loss, as it is explained on the main menu.), revealing four additional hidden levels in the style of the original Scary Maze.

The fourth level mostly consists of a long stretch of a very narrow path across three corners. Level 5 contains some narrow, windy sections near the beginning, and even adds some moving walls during the middle part. Level 6 is almost an exact copy of Level 2 with an extra part in the beginning, but much more narrow, and the back wall of the level actually starts slowly closing in on the player. The seventh and final level is just an extremely short stretch of a very narrow path towards the end. Reaching the end of this level will trigger the same screamer, as used a picture of Regan MacNeil from The Exorcist. but the usual one from the third level.