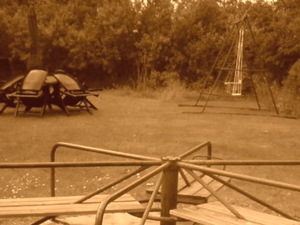 The video asks a final time to look closer and concentrate, and the merry-go-round picture shows again, now closed into its upper-left section (implying Amanda knows the secret by now). Of course, there's something lurking above the chairs circling around table which was the hanged ghost girl, and at 1:25, a black and white photo of bloody Mary in mirror appears, with the same scream from The Maze.

This screamer is so famous that it was used as an example in a wikiHow article called How to recognize an internet screamer and is one of the most famous screamers to circulate the internet.

Amanda Odenlid/rutgerhauerfan knew about something was wrong with that picture. If you look closely, there is a hanging ghost girl seen in the background above the round table which has chair circling around it.