Studying YouTube Screamers is a screamer video uploaded by YourTapeworms on 26 July 2008. The video is 11 seconds in length and disguises itself as a video on studying screamers but the video has a screamer itself.

The video immediately shows a picture of Regan MacNeil, Pinhead from Hellraiser and a baby with a loud scream. It then shows a video of a guy dancing with music before telling the viewer to look incredibly closely, put their head right to the speakers and turn them up full or preferably wear headphones. The video ends with a clip from a Blockbuster Video ad with a Dinosaur slapping a Rabbit with a carrot or whatever it could be. 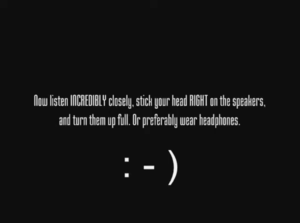 The text after the dance (5 seconds in).