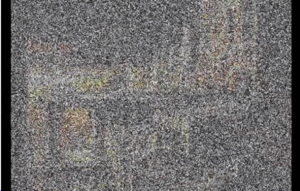 Relic Project 2007 is a screamer video uploaded to YouTube by VenerableDread on Jan 20, 2007. It has gotten over 1000 views since it was first uploaded, and is 32 seconds in length.

It begins with a yellow screen and two black, shaded texts presenting the video: RELIC PROJECT 2007 - WHAT EXACTLY IS IT? THIS PICTURE MAY HOLD THE ANSWER... LOOK VERY CAREFULLY.

After the text fades out, a picture covered in static appears, making it hard to make out the contents of the actual image. In fact, there is so much static blending together that the picture seems to be moving if stared at attentively.

After 10 seconds, a third yellow screen will appear with the following text: KNOW WHAT IT IS YET? NO? I'LL TELL YOU THEN...IT IS A

However this is suddenly interrupted by the picture of a skull, with excessive brightness and contrast, and a loud, whistle-like female scream. The final screen that appears after the screamer states:

FUFUFU...EVEN I CAN'T TELL YOU THAT!

I saw a chair and fireplace.