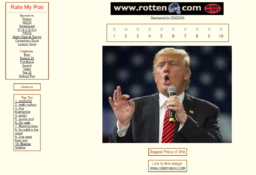 We rate zero stars for the sheer disgustingness!

Rate My Poo is a shock site made in 2001, the site collects images of disgusting poop rather than just recording it, somewhere later in 2019, the site appears to shows an image of President of the U.S Donald Trump, under the photo, there is a caption text in the protest of Trump, "Biggest Piece of Shit" is written, The website is partially closed as all the links will be redirected to the main page.