Rabailkal Hypnotic Experiment No. 1, a.k.a. The Spot, was the first in a series of two flash screamers. It claims to be a genuine experiment, actually trying to hypnotize the viewer. The instructions advise viewers to dim the lights in their room to make the experiment work, which in reality serves to maximize the scare factor of the screamer.

In the animation itself, viewers are asked to focus on a moving white dot on a black background, while a male voice repeatedly recites “Shadow and darkness visit me at night, here in the back room of my mind”. The dot will slowly move right and left, at one point fading into the second dot in a higher position, and emitting an expanding white circle at another point. When the dot is about to spawn one of those circles for a second time, a picture of a human eye with a red filter pops up with a loud scream, followed by menacing laughter. The viewer is then greeted by Dr. Rabailkal himself, who briefly promotes the author's website, Derivo.ch.

A German-language version also exists, which can be chosen at the beginning of the Flash when the viewer is asked to select their language. While the introductory text at the beginning is mostly a direct translation of the English text (or possibly the other way around, since the screamer was made in Switzerland), the sentence that is repeatedly chanted during the experiment is a different one. The voice says instead: “Die Dunkelheit findet nur abseits des Lichtes statt.” (Translation: “Darkness only occurs beyond the light.”). Other than that, both versions play out the same.

There is a sequel to this experiment, called The Spiral. 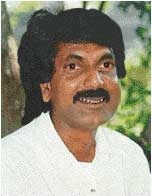 Dr. J.H. Rabailkal, the fictional psychologist behind both experiments.

In order to further trick viewers into believing that the hypnotic experiments are genuine before they access them, the author set up an entire website to host both screamers at Rabailkal.com. The website includes a fake profile that is translated into English and German of Dr. J.H. Rabailkal, who is said to be a university teacher and doctor of hypnosis and psychology from Bombay, India. Viewers are also personally greeted through a narrated message from Dr. Rabailkal as soon they enter the website, both in English and in German, spoken in a staged Indian accent, though the speaker's native Swiss accent slips through a couple of times during the German section.

Other than hosting the screamers, the website contains an online shop, which is now defunct, and links to commercial partner websites, one of them being defunct as well as of 2017.