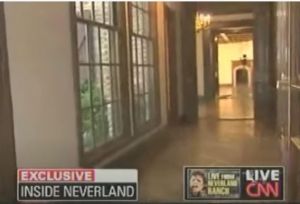 Proof of Michael Jacksons Ghost. is a video uploaded to YouTube by a user named amnesiafish on 2009.

At the beginning, the text appears: "Michael Jackson's "alleged" ghost as seen on Larry King Live has been seen by millions. Our Audio Engineers managed to extract an additional layer of sound from this clip. Listen carefully. This is actual audio from the original clip." The cameraman enters a long hall. At the end of the hall, a productions person mysterious shadow that is 100% Michael Jackson's appears but the cameraman doesn't notice. After that, the video freezes, and a zombified Michael Jackson pops up on the screen, with the scream from The Maze. This is followed by "Thriller" playing on a black screen with the text "Just a small tribute to a man who will never stop thrilling us. We'll miss you MJ."