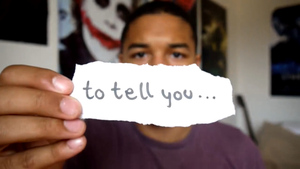 Life Changes is a screamer video found in YouTube, originally created in 2012.

In the video, a guy named Ryan tells the viewers a personal story by picking up pieces of paper from underneath the camera and holding them in front of it; each paper containing a part of the story.

Eventually, he gets to a part where he talks about getting a message from his brother: "Ryan... I've got something to tell you...". It is after this that he moves again to seemingly grab another piece of paper, but once he pulls his hand back up, an eyeless person from one of Dane Boe's "Scary Faces" videos pops up with the same scream from The Maze.

Some text appears afterwards: "Now send this to someone close to you...so they can share my story. Thank you."

While the original video has been deleted, it was reuploaded by The Youtube Archivist in 2018.

There's also a reaction video that ends with an eyeless blue-haired girl with sharp teeth, along with a high pitched scream.

I remember this video...

It scared the shit out of me...