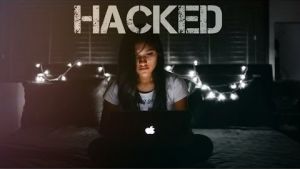 HACKED- A CYBER BULLYING SHORT FILM is an Indian short film that contains a screamer. The film can be found on YouTube uploaded by its creator, Shreyash Nair, who made it in 2016. It has gotten over 76K views since it was first uploaded.

The film is about an Indian girl called "Suhana" whose Facebook account gets hijacked: it focuses on cyberbullying and the effects it can have on its victims.

The film advances normally up to the 10:45 mark, at which point Regan MacNeil from The Exorcist pops up with a loud female scream from the infamous screamer video Ghost Caught on Tape, scaring the protagonist. This screamer seems to be intended as part of the movie, which then continues as normal.

The you fat sex baby pregnant film not bully me.

The you fat sex baby pregnant film not me.