Goodbye to the Dolphin's Dream 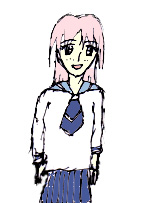 The picture of Iruka (イルカ).

Goodbye to the Dolphin's Dream or Goodbye to Iruka’s Dream (イルカの夢でさようなら, Iruka no Yume de Sayounara) is a Japanese screamer website, considered to be one of the words you shouldn't search on Google. The author of this site is actually the Vocaloid music producer “ATOLS”: he made this site when he was a teenager and was studying HTML.

When the page is opened, a girl with pink hair (named Iruka) says in a lovely voice "Please go ahead after killing me!". If you start clicking on her illustration, she violently disintegrates, and strangely she will regenerate too. The strangest thing that you can notice after killing the girl is that the blood pool has a shape of a dolphin, probably referencing the site's title.

The website was taken down due to the end of Yahoo Japan's service in March 31, 2020. 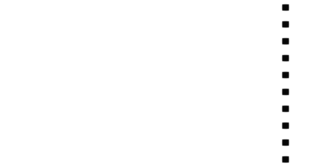 The site after you killed the girl.

After killing the girl, A lot of black squares will be displayed, and the consequence of clicking one of them will be these:

A hand is displayed.

It used to be a page of a Japanese word that possibly means: Manga

There is a comic (マンガ) of a girl and a stuffed rabbit. The girl eventually beheads the rabbit. The rabbit farts (オナラ) and then the girl screams that he is not her friend, and beheads him. If you keep clicking, some abstract art drawn in black ink shows up.

The Pokémon Shock Phenomenon (from the banned episode "Dennō Senshi Porygon") may occur if you click here. 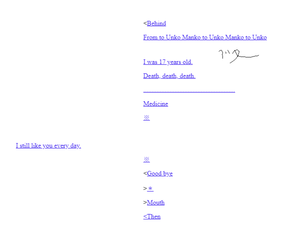 Now, more things to click. When you click on one of these links, you will be redirected to a random piece of extremely loud audio. Every link has different audio if you click on it.

Here's the description of each link's audio:

More squares here. You will only be redirected to four pages after clicking in the squares: one that displays a fast array of some random images, a bandage that says Japanese text, the page repeating "death" in Japanese, and one that will redirect you to the fourth square page, so be careful.

A picture of a flower will appear. If you click on it, you will be redirected to a page repeating "death" (死) in Japanese.

You will be redirected to a page called "rapeme.org". Despite the URL, the site is actually harmless and there are only some beautiful and yet shocking illustrations of an artist called Ryuko Azuma.

Again, you will be redirected to another site called MMLAB.

One of my favorites definitely, there's nothing I don't love about it.

Something about pages built with extremely simple HTML, with no CSS whatsoever, makes them so much more effective when it comes to scary content. Must be the feeling of unreliability their look builds up.