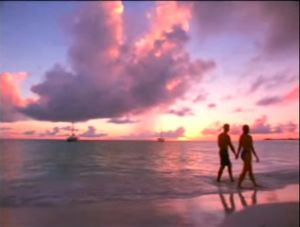 The commercial starts off with some lovely imagery of two lovers walking across the beach near the ocean. Boats can be seen sailing in the distance. The lovers eventually stop, and are about to kiss. Before they lock lips, a tiki zombie appears with a grunted yell. The text at the end reads: "Think that was scary? Liberal Democrats in Congress have plans for $2.4 trillion in higher taxes. The plan includes $2700 a year in higher taxes for married couples. Now that's scary."

The zombie doesn’t scare me, but Politics does!

jk its a joke