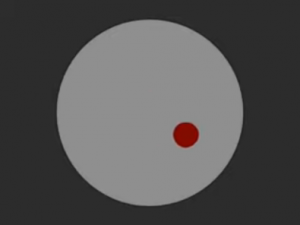 It's more boring than it looks.

It starts off with a warning that it is not suitable for children or people with heart problems. After this, the video shows a red dot moving around in a gray circle, on a darker background. Slow, melodic music plays. At 39 seconds, an old ghost woman pops up with a loud and compressed audio of Stan and Kyle from South Park saying the iconic phrase: "Oh my god! They killed Kenny! You bastards!". "Folge dem Punkt" translates to "Follow the Dot". As of 2017, the video has gotten a million views.

This guy doesn't wanna get sued