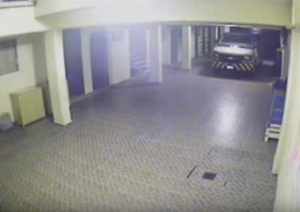 El Fantasma Escolar (The School Ghost in Spanish) is a screamer video uploaded to YouTube on September 24th, 2009.

The video is about what is supposed to be the recording of a security camera of a school; first part of the video shows students in class having a normal day, while the second one is footage of the school at night, with no one around. There is text in Spanish, which reads: "¿Viste? Fijate bien, va de nuevo y en cámara lenta..." (Seen it? Take a close look, here it goes again and in slow motion...) and then after a few seconds (0:32), a picture of Regan MacNeil from the The Exorcist appears along with a female screaming in agony. Seconds later, at 0:38, it says "¡¡¡Ahhh que poca!!! Ahora vengate enviandolo a quien mejor te caiga" (Ohhh goodness! Now get your revenge sending this to whoever you like best) while the song El teléfono carpintero by Las Ardillitas plays.