Dr.octagonapus and WTF BOOM!! Slowed down 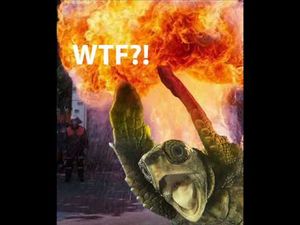 Dr.octagonapus and WTF BOOM!! Slowed down is a screamer video by user JoeyDePeter.

The video starts out very normally by showing the title card, which appears to be edited together with Windows Movie Maker, Then, it shows a badly-drawn picture which depicts a Dr.Octagonapus coming against another person wearing a red cap, the audio taken from the original clip is slowed down, in the next part, the video shows a photoshopped image of a turtle running away from the explosion along with a text stating "WTF?", the audio is slowed down, in the last part, it shows a text fastly scrolling up on the screen stating "K bye rate", at the end, a picture of Regan MacNeil pops-up along with a loud scream.