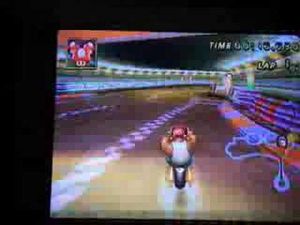 The video starts off with normal Mario Kart Wii gameplay, where the player chooses DK character Funky Kong to race on Daisy Circuit in the Time Trial mode. However, as soon as Funky jets out boost, Regan MacNeil pops up with her usual scream. Later, a text appears on a blue background saying "LoL..gotcha!" ending the video.

i hated those bait to switch thingies