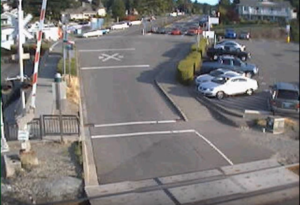 Thankfully, no car was hit by a train here.

Car Hit by Train is a screamer video uploaded by YouTube user thinkyoucanhandleit on August 21, 2009.

The Video tells the viewer that they will see webcam footage of a car getting smacked by a train at a crossing. The pictures proceed and after a while, the viewer then sees the head of a girl with her face almost entirely ripped off (though not very graphic or disturbing) showing some blood, an empty eye socket, not to mention her teeth in bad state. (actually an edited photo of Jada Pinkett Smith from Scream 2.) accompanied with two loud screams which is also used in The Maze. It then cuts back to the pictures which naturally don't show a train hitting a car.

That picture of the girl with a injured face is actually an edited picture of Jada Pinkett Smith from Scream 2.