April Fool's on the Internet Sucks 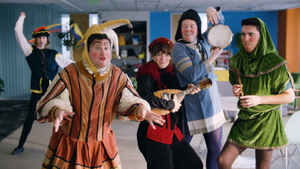 The clown delivering the fatal line.

April Fool's on the Internet Sucks is a screamer video uploaded to this humor website CollegeHumor on March 31, 2018; the video was made for CollegeHumor's "Hardly Working" series of videos.

Near the end of the video, one of the clowns gives the following line: "The oldest, least original prank on the internet, is when you're engaged, in some sort of internet activity, concentrating real hard, and-" but is suddenly interrupted by an old lady with no eyes, who appears over the same, extremely loud scream of The Maze. Afterwards, the closing sequence of the channel's videos plays before it ends.