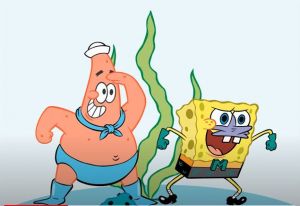 "Amigos tontos" is a video uploaded by the user "panterAzull" on October 26, 2009. the video has over 2 million views.

The video starts out by showing a spanish dubbed version of the whole song called 'Idiot Friends', which is from the Spongebob episode called 'Pest of the West', while being shown with a montage of pictures depicting Patrick and Spongebob (hence the song name), only to get interrupted by a close-up picture of Regan MacNeil from the The Exorcist, along with a high-pitched, noisy, loud scream.