6 Girls 1 Dead Guy is a fake shock video that has four supposed reaction videos to it on YouTube, all of which contain the same intro. This video is a complete hoax that doesn't exist at all, just like 3 Orangutans 1 Blender. 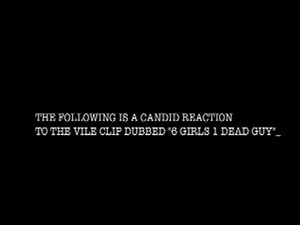 The intro to all of the reaction videos

There are only four recorded reaction videos of this so-called "6 Girls 1 Dead Guy" shock video. On every video, there is an intro which shows a black screen and a text being typed saying: "The Following is a candid reaction to the vile clip dubbed: "6 Girls 1 Dead Guy" and then proceeds to show the videos of people "reacting" to it and being disturbed by it, etc., along with a song which is added in the videos, not from the actual thing they were watching. It's possible that the reaction videos were of people reacting to other Shock videos such as 1 Man 1 Jar or 2 Girls 1 Cup and not to this made-up shock video "6 girls 1 dead guy".

The most popular rumor is that the video is about six Asian girls mutilating and having sex with the titular corpse of an Asian man. First, they gouge his eyes out, defecate on his corpse, and then chop off their limbs onto him as well. It is said that the video has either caused seizures or suicides according to the same rumor.

There is another rumor claiming that the girls are playing with a mannequin, which is rather staged and is not so shocking.