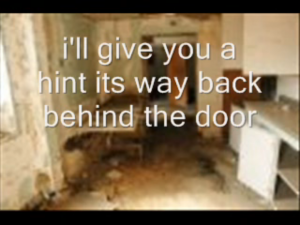 Should consider yourself lucky for seeing the door itself at all.

1 thing wrong is a screamer video uploaded to YouTube by UserWasKilled on June 18, 2008. This user is also known for making the screamer video, Art of the Dead.

The video shows a picture of an abandoned room, which is of very low quality even by 2008 standards. Some text appears and tells the viewer that one thing in the room is wrong, asking if they can find it. It's followed by a hint which states that it's supposedly "way back behind the door". Finally after a few seconds, the video directly tells the viewer to get closer if they can't see it. Right after the text shows up, an image of Regan MacNeil from The Exorcist pops up along with a scream.

im glad i dont live there

good for you
Permalink
Retrieved from "https://screamer.wiki/index.php?title=1_thing_wrong&oldid=35309"
Categories: