Rorochan_1999 was the online alias of a 14-year-old Japanese girl from Ōmihachiman who committed suicide by jumping off her apartment balcony while live-streaming on the night of November 24, 2013. She was a live streamer known for seeking attention and doing dangerous stunts, mainly standing on the edge of her roof and running across busy roads. The story brought in a lot of attention after the song "Ruru's suicide video on a livestream" was made by the band Shinsei Kamattechan in 2019.[1]

Prior to committing suicide, Rorochan_1999 was a live-streamer on the Japanese streaming sites FC2 and Niconico. Her videos mostly consisted of her singing and playing the piano. She often wore a mask that appears to be a huge pink bag with one poked hole to see out of, possibly knowing she was introverted and never wanted to reveal her face. Her classmates stated that she didn't have any friends and was lonely. She would give her live streams very weird and explicit titles, like "Erotic Menhera Virgin, 3rd year of junior high school" (3rd year of junior high school is roughly 7th or 8th grade). "Menhera" is a slang term in Asia that refers to people, mostly girls, who suffer from mental illness.[2] The titles of the live streams attracted her very malicious fans. Her profile picture on a few social media sites was Minky Momo, a female character who was run over by a truck.

Rorochan_1999 was also known for her weird behavior and attention-seeking, as well as for doing dangerous stunts and other risky situations like standing at the edge of her apartment roof and running across busy streets. Even though some comments on her live streams encouraged her to stop, most comments supported this behavior and told her that she would become a legend if she hurt herself. In her final live stream, she walks to the 13th-floor balcony of her apartment building, talking and believing that she will become a "legend" if she jumps off the balcony. There were a few viewers who either encouraged or discouraged her to do or not do so. However, it was too late for her and she quickly jumped off the roof while on camera. Some viewers who allegedly saw the video claimed to hear the screams as she jumped off. The live stream was completely lost, and only a GIF of her falling down was available, until September 14th, 2020, when a full live-stream video with audio was found.

Many people aware of Rorochan's situation believe that jumping off the balcony to become a "legend" was not the only reason for her suicide. They believe it was rather a mix of all the factors, including mental health problems, loneliness, and the putrid followers she attracted that led to her death. There is no evidence that she was being bullied or neglected.[1] 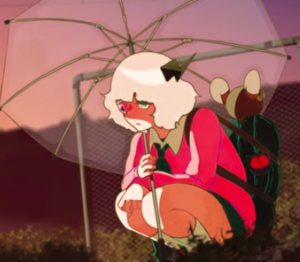 Rorochan's full name has been kept secret by her family for privacy, so it's possible she doesn't have an obituary or memorial of any kind.

A band called Shinsei Kamattechan released a song based on the story titled "Ruru's suicide video" in 2019.