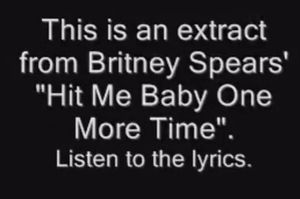 Britney Spears Hidden Message is a screamer video was uploaded back in 2006 made by VenerableDread, the same uploader of the Saddam Hussein Execution prank.

The video plays an extract from Spears' song "Baby One More Time." The video then plays the same clip in reverse while telling the viewer to "Listen very carefully to the lyrics." Next, the video plays the song in slow motion, but before the end of the song, a negative image of a skull pops up with a feminine scream. After the scream, text appears on the screen telling the viewer, "Hmmm... strange. It sounds slightly different. Pranked by VenerableDread"