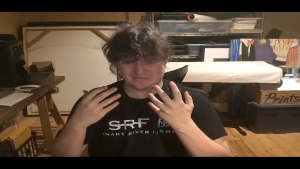 2 Men 1 Girl 1 Supper is an unknown shock video, possibly a fake one, with only reactions of it. It is unknown what actually happens in the video but all of the reaction videos contain the same audio clip of the titular man and young girl screaming and crying with slapping sounds in the background along with a synth drum loop. Despite all of this, there is no evidence of the video actually existing.

According to rumor, there was a comment that was deleted that reads this, "2 Men 1 Girl 1 Supper starts out with a man scolding his 13-year-old daughter for not eating her dinner. As far as the setting and the people look, it looks like they lived a richer-looking house, the dad looks like a shaved man with a "golden boy" kind of look with the short greasy hair but older, the girl has like black hair with a yellow short little yellow dress, and it's set in like the afternoon despite it being called a "supper", and then he picks her up and then brings her into another room where he scolds her even more, then he takes off her clothes and underwear, then picks her up and starts spanking her with a paddle. She at one point starts bleeding and he then he starts throwing things on her butt such as putting bleach or lemon juice on her bruised naked butt to aggravate her pain, pulling her hair, insulting her, defecating on her butt, and covering her mouth to drown out her screaming and crying with the cameraman is laughing the whole time, as well as show her bruised nude butt and all of the damage he has caused as the cameraman calls her a “Stupid Little Cunt.” He insults her one last time before the video ends. The video was filmed up-and-down and was one of the first iPhone videos and it was filmed around 2010 or 2011 but wasn't published until 2013, it also had some intro and logo to it indicating it was part of some media company that did this kind of media. This video has already been watched by millions of people everywhere, and the disturbing nature of it has caused permanent nightmares, seizures, and even suicides, mostly parents have been emotionally affected by it to the point where they had gotten divorces and/or committed suicide. Whatever you do. Please. DO. NOT. WATCH. THIS!!!!!!"

There is also is another rumor stating that there were more videos of the little girl being abused very intensely more than just what is seen on the video. (If this is even let alone what is really happening this particular video.) And that the majority of it was on the dark web.

Very little is known about the video, and all there is for a “video” is just a “soundtrack” of what is supposed to be what is happening in the video with a synth drum loop being played over the top of it along with yelling and crying noises from the two men, and the little girl in question.

In the “audio clip” it starts out with a man yelling at supposedly the young teenage girl, supposedly at a dinner table, and then him taking her somewhere else in the house, and then we hear slapping sounds and her yelling in pain, which gets worse. Pretty soon she starts wailing in pain and the man verbally insults her. She even calls him a "Fucking idiot." Then pretty soon after a while, we hear her scream harder and more in pain with her whining and then the man scolding her again before the video ends. Then he scolds her one last time as we hear the cameraman laughing the whole time.

I mean if we can't trust anonymous user 1 then who can we trust?
Permalink
You are ignoring the author of this comment
Show comment | Manage ignore list

This sounds disturbing and mysterious but is this really true? I may need answers!

The slapping seems realistic. it could be real

What kind of bullcrap? Seems like the same lies that were made as in the 3 Orangutans 1 Blender video. "bleach or lemon juice"

Only reactions exist and both of these not existing videos have caused "seizures, and even suicides". What kind of crap is this?!?!?

BOTH HAVE ONLY A SOUNDTRACK THAT CONSISTS OF MUSIC AND CRAPPY DOWNLOADED SOUNDS.
Permalink
You are ignoring the author of this comment
Show comment | Manage ignore list

looks illegal i aint clicking on that audio file

Why is this on here if there's no shock video or screamer?

there is 2 things about in this wiki, 1. you can make your own article if its a screamers or shock site 2. if its a shock site make sure put on the "Shock site Category" and its only for people who are over 14?
Permalink
You are ignoring the author of this comment
Show comment | Manage ignore list

I found it on the dark web! DO NOT WATCH IT

A video of a kid being spanked would probably scar you for life, not make you sleepless.

So, is the video real?

So this is like a scaled-down version of Daisy's Destruction?

It was probably just a project created by some friends, just like 3 Orangutans 1 Blender.

This one is definitely also fake

That was a good hoax there

if it was a hoax then why the sound file looks so real. its really hard to find the video on google. maybe it could be on dark web

this couldn't be real by law

That audio file is so convincing, I think it might be real.

Why does the audio file keep being removed?

This is just for historical and informational purposes despite the nature of it.

Is it real? link please?

is that devin millar?

That reactor is devin millar. he did good on this.

Did Devin voice the audio clip himself?

So I guess Devin Millar made this. But was very convincing though.

I know we are all curious, but why would you wanna ever see a child being spanked? thats is horrific and illegal **IF** this is even what happening in that video. probably wouldnt wanna watch it anyway even if it isnt illegal.