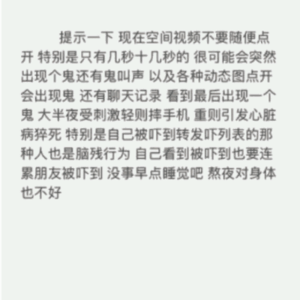 A still from the .GIF

Useful Reminder is a GIF screamer which spread across QZone (a Chinese social platform). It has a very similar concept to How to tell if a video is a screamer. Once played, it first shows some text on a white background, which tells the viewer not to open media of an unknown origin as it might contain screamers. However, after 6 seconds, the image changes to a scary woman staring at the viewer for 2 seconds. After that, the GIF starts over. As it's a animated image, there is no sound at all, thus no scream.

NOTE: Do not click on videos in QZone unprepared, especially those only several seconds in length. There is a high probability that they will pop out a ghost with scream. Also you should be aware of those GIFs and long pictures of chat history as they might contain the same prank. Being shocked at midnight, not only you may not hold your cellphone steadily enough to not drop it, but also even have a heart attack to death. What's more, these idiots who have been scared by these things and decided to spread them to their contacts are also stupid. You'd better go to bed early, as staying up late harms your health too.