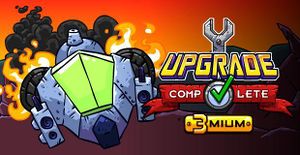 Screamers aside, this is a good game.

Upgrade Complete 3mium is the third and currently last game in the Upgrade Complete series. Much like in the first two games, the ultimate goal is to purchase every available upgrade, which yet again involves earning in-game coins by playing a simple shoot-em-up. While the first two titles featured a classic 2-D sidescrolling space shooter, this version instead has the player control a space ship to defend a stationary base that harvests "precious whale oil" against recurring waves of enemies that get progressively harder to defeat.

As the "3mium" tag implies, it is supposed to be a parody of modern "pay to win" games. Upon starting the game, it already assumes that the player has bought the "premium version" with all upgrades unlocked, inviting them to push a button to beat the game. This leads the player to a fake PayPal screen (actually a link to the Armor Games homepage), and closing it will cause the game to immediately revoke all upgrades, challenging the player to earn them from scratch, like in the previous two games.

The warning before unlocking the upgrade.

Just like the second game in the series, this version features a screamer in the form of a "Heartrate" upgrade, which actually comes in three different steps this time, the first two of which being intentionally non-scary. Upon attempting to unlock the first Heartrate upgrade, the game first displays a warning message, reading: "Warning Time! The 'Heartrate' upgrade features a 'jump scare'. It's teeeeerifying! It may not be good for weak hearts! Only upgrade this feature if you understand that it may be horrific!"

Unlocking the first Heartrate upgrade, however, only causes a deliberately crude drawing of a cheesy bedsheet ghost to pop up and move around, while a normal voice says: "Whoooaah! I'm a scary ghost! Wooooo!".

After unlocking the second upgrade, a photo of a normal guy with bad MS Paint scribbles to make him look like some sort of specter appears, complete with scribbled red text saying "Oooh!", "So Scary!" and "Genuine Terror!", while the same voice says: "Wooo! I'm even scarier! Whooooaaah!".

Then, after unlocking the third and final heartrate upgrade, the regular "Upgrade Complete" logo pops up and gameplay returns to normal, leading the player to believe that the entire heartrate upgrade was just a joke this time, and possibly a parody of the same feature from the second game. However, after about 20 seconds, when the player has most likely gone back to playing the regular game already, a blurry picture of what appears to be a child with beady black eyes pops up across the screen with a scream.

If the player has not yet unlocked the game's audio through an upgrade at this point, none of the three jump scares, including the third, genuine screamer will play any sounds.