The Never Ending Level Game is a Flash game by Clarence Ball. The latest version was released in early 2010 and contains 300 levels, but earlier versions were released as early as 2005 and contained significantly fewer levels. The earliest known version, for example, included only 75 levels, with later versions continuously adding more, hence the name. The game contains a screamer at level 113.

The objective of the game is to figure out how to get to the next level, which usually involves a password. The first few levels are extremely simple and flat-out tell the player how to proceed, while the later levels contain progressively more difficult clues, which eventually require an extreme amount of creativity and lateral thinking, to the point that they may even require the player to open additional applications or to play around with the flash menu in order to proceed.

Deep within the game, in Level 113, the game shows a large wall of text containing perplexing and seemingly contradictory clues, which, however, do not seem out of place at this stage of the game. It reads: 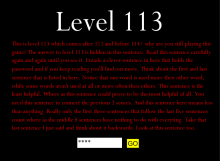 “This is level 113 which comes after 112 and before 114/ why are you still playing this game? The answer to level 113 is hidden in this sentence. Read this sentence carefully again and again until you see it. I made a clever sentence in here that holds the password and if you keep reading you'll find out more. Think about the first and last sentence that is listed here. Notice that one word is used more than another word, while some words aren't used at all or more often than others. This sentence is the least helpful. Where as this sentence could prove to be the most helpful of all. You need this sentence to connect the previous 2 sences. And this sentence here means less than anything. Really only the first three sentences that follow the last five sentences count where as the middle 8 sentences have nothing to do with everything. Take that last sentence I just said and think about it backwards. Look at this sentence too.“

As it turns out, the entire text was just a red herring, and after about 35 seconds, four identical pictures of a man who pulls his own eyeballs down his face with his bare hands pop up zooming in and out with a red filter, accompanied by a female scream followed by a Psycho music.

After this, the screen goes black, with white text slowly scrolling up, saying: “This entire game, from start to finish, was only a screamer. I hope I made you crap your pants because you just wasted many hours of your life that you'll never get back...”

The screen then stays black for a few seconds, after which the words “APRIL FOOLS!!” pop up, followed by an actual hint to beat the level.

If the player already knows the password beforehand, it is possible to bypass the screamer, since it is not necessary to wait for the screamer to show up before the solution becomes available.