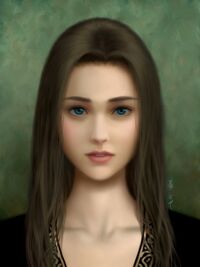 The original image used in the very famous creepypastas. 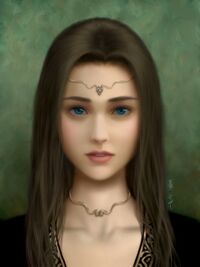 The alternative version where Princess Ruu was given a jewelry head necklace.

The Melancholic Princess, also known as Princess Ruu and more famously known as Sonee, is an art piece created by Robert Chang. Eventually, it took on a life of its own and evolved into an internet urban legend. The legend of Sonee has served as the basis and set up for numerous internet jumpscares. Aside from being a classic creepypasta, the picture was of a sci-fi/fantasy screenplay from which the author Robert Chang had been writing at that time, titled "Tellurian Sky".[1]

The Melancholic Princess was created on February 18, 2002 by Thai artist Robert Chang, also known under the pseudonym "Lunatique".[2] The piece was created as concept art for a sci-fi/fantasy screenplay he had been writing, titled Tellurian Sky.[1] The subject of the painting is the main character, Princess Ruu, in her final casual portrait before her coronation following the death of her father, the king. Ruu's melancholy expression is intended to capture the grief for her lost father, the burden of her impending responsibilities, and the pain of knowing that she will be permanently separated from her lover once crowned.[1]

Eventually, the painting somehow became the subject of an online urban legend. Chang himself caught wind of the legend a few years prior to 2006, when he received an email about it from someone in China (which therefore is where it is most strongly suspected to have originated). During this period, the legend was textually transmitted through online forums. Eventually, even English speakers sent emails to Chang as well, indicating that the legend had spread into the western hemisphere. Chang recounted this experience in a blog he posted on May 31, 2006.

Only less than one month later, the urban legend truly exploded. On June 11, 2006, YouTuber sonee uploaded a video[3] titled "SONEE: Scary Clip". The video features a line of text which had to do with the lore and the picture changing. The video then prompts the viewer to stare at the painting for 5 minutes, accompanied by creepy music. At the end, the video then asks, "Did you see it?", before fading to black. This video gave major exposure to the urban legend, which many took to calling "Sonee". The template of Sonee provided the perfect conditions for a jumpscare, an opportunity which many internet users took advantage of. Numerous variations of the above video/legend were soon uploaded to YouTube, with jumpscares included at the end. Examples include "SONEE: (The Real Story)", "The True Story of the Melancholic Princess", "Scary Japanese Girl Illusion", and "Scariest Screamer".

While the urban legend is obviously false, many have still reported seeing the painting warp itself when staring at it. Many people, especially fellow artists, have offered several explanations for this. Most of the painting is blurry, except for the eyes, which pronounce Ruu's piercing gaze. Additionally, the art style is a blend between anime and real life, causing an Uncanny Valley effect. And due to the rest of the painting besides the eyes being blurry, the viewer's brain may "automatically" adjust the image to slight degrees on its own, making the image seem as if it has moved or warped.