The House 2 is a horror flash game developed by Thai graphic artist Sinthai Boonmaitree, and published on his website, sinthaistudio.com. It is the sequel to The House and the basis for the Alrena Roushe's Facebook Profile website. The game contains several jumpscares that can be considered screamers.

in both games, has the player explores an old abandoned house and discovers the fate of the former residents. The text at the beginning of the game reads "The legend has is that there is a house in a small town that has been closed and left empty for decades. The house belonged to a wealthy family. But then, one day, all family members father, mother, daughter, and the maid, committed suicide. From that time, the neighbors have closed the house for good as they believe that the house where all family committed suicide is a curse. Some said that they have heard a women's screaming voice from that house. Yet no one dares to enter that house... are you?"

As the players progress through the house, they collect notes that reveal the family's fate. The mother and father gave birth to a child, Alrena Roushe, but the child had an incurable disease. Instead of letting Alrena suffer later in life, the parents poisoned her and hid her body in a safe. Later, the parents decided to adopt a new child, Nicole A. Matty, as a way of replacing Alrena. But Alrena's vengeful spirit still resided in the house. The parents, racked with guilt and driven mad over what they had done to their daughter, murdered Nicole and the maid then both committed suicide (the father in the shower, the mother in the working room). At the end of the game, it can be assumed that the player is killed by Alrena's vengeful spirit after she is released from the safe. 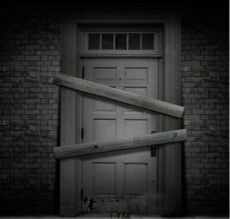 The Door, After starting the gameplay.

There are no jumpscares on the outside of the house. Simply click to zoom in and click the wooden boards to remove them and click again to to enter the house. 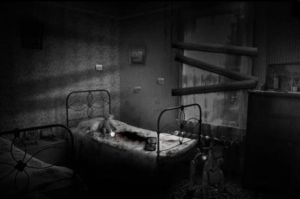 In Nicole's bedroom, click on the music box, teddy bear, adoption certificate (on the wall), and picture (poking out of the drawer) to proceed. It should be noted that Nicole's spirit will appear several times as you progress the level; sat on the floor, her shadow standing in the window, and darting across the screen. At the end of the level. Nicole's spirit will flash in front of the screen, both close up and in mid-shot, but will disappear and the loading screen will appear. However, this loading screen is to lull you into a false sense of security, as Nicole will suddenly appear in front of you with a bloodied face and twisted smile, and a scream plays.

The third room is called the bedroom, which is the room of the adopted child of the couple, Nicole N. Matty. A music box, Nicole's teddy bear on her bed (the bed's middle part is covered with blood), her adoption certificate, and by the middle of the room's gameplay, a picture of her parents, herself, and her dead sister, Alrena, is enabled for the player to observe. Again, by the middle of the gameplay, three notes appear on the wall and the player has to read them to move on to the next room. "She comes every night. She loves playing hide and seek. She's very good at it, I never find her.". These notes and the picture implies that Nicole's aware of Arlene's existence and that she appears every night. Nicole appears cuddled up next to her bed afterward, and a few seconds later, a bloody text appears on the wall reading, "Play with me." Then the room is completed when Nicole appears on the screen.

NOTE: The following game contains a lot of screamers.