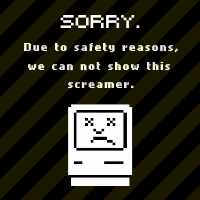 The EXORCIST 360 EXPERIENCE is a well-known 360 video and it's contained a screamer working in 3 Dimensions made by FOX on September 24, 2016.

It starts with the message when telling the viewer saying: "THOUSANDS OF EXORCISMS ARE PERFORMED WORLDWIDE EACH YEAR. NOT ALL OF THEM ARE SUCCESSFUL..." it begins with the attic room. which in virtual reality. the girl stalks at the viewer when followed, the demon's voice can be hear and now a red text flashes when the girl slowly followed to the viewer, the white icon of Jesus flashes and the girl laughs and lights flickering, after 1:13, a possessed girl pops up with the high pitched scream. the demon's voice is asking: "I WANT YOU TO SEE, EVERYTHING" which sounds like a robot, after a few minutes when it's passed, the girl crawling the viewer. however, at 1:47. a possessed girl pops up along with a loud roar.