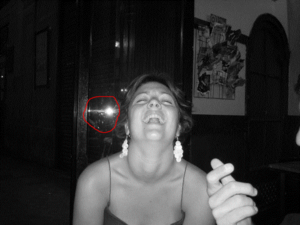 Scary Woman GIF was a screamer GIF created in 2012 by Unknown maker.

The screamer itself disguises as a picture of a woman laughing and a red circle, in which the player has to focus on, to see the ghost, much like shitbrix pranks, but there is no context of it, the picture will stay still for 4 seconds, before the woman on the pic comes up on the screen, with empty eye sockets, since it's a GIF, regarding that there will be no sound playing,