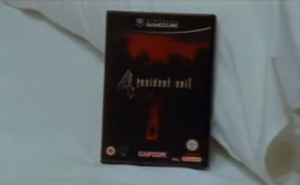 Resident Evil 4 TV Commercial is a commercial and it contains a screamer.

The ad cuts into a naked woman breastfeeding her baby in a bedroom with the narrator says: "Remember where you are, feel the most secure. Most comfortably, most liked. this place will never exist again" after a scene of an baby. but suddenly, the woman's face fades black and a zombie face shows up with a high pitched scream. It then shifts towards montages of gameplay videos after which the Capcom logo appears. After this, a zombie's face pops up again.

This is often considered to be the weirdest commercials ever, ranking at #5 as "Zombie Breast Feeding" in the "Top 10 Weird Video Game Commercials" video, made by WatchMojo.com

An already scary game with a scarier commercial. Game commercials can't just get away with this nowadays.