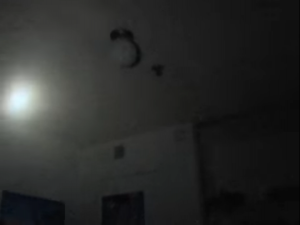 The show of hands is just about to begin.

Real Demons Caught On Tape is a video made by a guy named Justin Martinez. It was uploaded to YouTube, however, by a user named chestertyler714.

The video starts off with our POV scattering around a room in search of something. It turns out they were searching for a flashlight, and shortly after turning it on towards the ceiling, a bunch of green hands start phasing through it. The hands continue to burst into the walls, followed by tentacle-like appendages coming from under the door. Shortly after the camera catches an eye on the wall, it blacks out. A few seconds after, the camera focuses on a figure made out of hands. Not long after its introduction, it jumps and screams at the camera abruptly, knocking over the POV, and ending the video.

The video has since been praised as one of the better "caught on tape" videos online, and that the jumpscare at the end was pretty effective.

This clip was featured in the [Adult Swim's] "Off the Air" episode "Nightmares".

Where did the scream or any of the sound effects come from? They all sound familiar.

That was definitely really well edited

I remember having nightmares for weeks as a kid when I first saw this.

This made me afraid of my own room

the first after effect video

this is all fake entirely. from the fake camera light, the filter, the hands being green screen, and the man recording kept going down and not showing everything. But it is very well made though

2006 was the prime season to be creative. We should cherish every moment of it such as this.