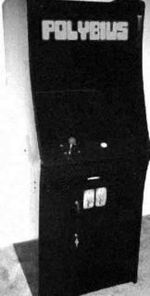 Polybius - Angry Video Game Nerd (Episode 150) is an episode of the long-lasting YouTube series Angry Video Game Nerd (AVGN), created by James Rolfe. It is the 150th episode of the series and revolves around the Nerd finding an arcade machine for Polybius: an urban legend. The legend claims that there was once an arcade game that unknown men in black confiscated after many players became sick, mentally ill and were even driven to suicide. The episode was released on October 25, 2017, as the Halloween special for that year.

While the episode doesn't feature screamers as a prime subject; the episode does end with two screamers, one when the Nerd is recording the gameplay against his will (21 minutes and 33 seconds into the video), and another when the YouTube 'video unavailable' appears ten seconds later.