Ghost in The Back Room Caught on Tape 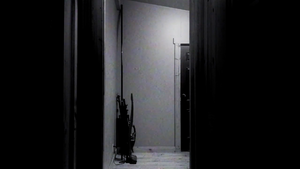 Ghost in The Back Room Caught on Tape is a screamer video that appears to be an early version of the Demonic Ghost Caught on Tape (Circa. 2005) by Finder Lurker, and made even by them as well released on June 9, 2020.

It starts out with a dark hallway with the end room being the only thing that is lit in this scene, then pretty soon strange and scary things start happening such as scary heads poking out from around the corner looking at the camera, hands falling, hands coming out from both sides of the room. Then eventually there is one last hand that attempts to get a hold of the door to close it but then a demon with empty eyes and a large mouth jumps up and screams loudly.