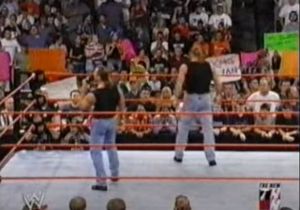 Did you spot John Cena?

Ghost Caught On WWE is a screamer video uploaded onto YouTube by a user Josh Williams.

The video starts off with D Generation X members Shawn Michaels cutting a promo alongside Triple H. Then the video cuts to text that reads, "Did you see it?". Then the video slows down the speed of the clip until around one minute and fourteen seconds, a picture of Regan MacNeil pops up, the scream was originally coming from the Star Wars character R2D2 is heard.

This video has also received a ton of hate from younger wrestling fans who were curious enough to look up a video of a supposed Ghost appearing on WWE Television.

Fortunately, it did not exist in the WWE Network